When you imagine going to the beach, what’s the first thing you think of? Perhaps it’s sand or sun, perhaps it’s rocky intertidal areas, or perhaps it’s waves. Those waves that you may love to surf are also a critical aspect of coastal systems from many different perspectives. As waves approach the shore and break, they bring energy and momentum to the coast. These drive currents near the shore and the associated movement of sediment, pollutants, and larvae, to name a few.

Given the importance of waves, coastal scientists and engineers often measure how they change as they approach shore and break. This has often involved placing rows of instruments in the water to measure changes to their height and direction as they travel. This is effective, though can be costly and dangerous to do, especially on rocky coasts like those around Asilomar State Beach.

Oregon State University researchers are using new technology to measure waves from the sky. We are using a drone equipped with a laser range finder (called a lidar sensor) to measure waves over time. As the drone hovers, the lidar shoots a laser pulse at the water surface (invisible and harmless to humans, birds, and marine mammals). This pulse is reflected back to the sensor by bubbles and foam and roughness. Since we know the speed of light and the location of the lidar, we can use the time it takes the pulse to return to the lidar to calculate elevation. By doing this many times a second with many laser pulses in different directions, we can build a map of changes to the water surface elevation over time. 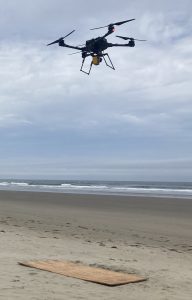 Oregon State University’s drone in the air. The lidar sensor is the small yellow box below the drone body.

These maps can be interrogated to determine changes to the waves at individual points, like if instruments were placed there. For example, the image below shows the elevation of the water surface at one point over a 1 minute period, showing the waves (peaks) as they pass by that point about once every 10 seconds. But the lidar allows us to do this at many more locations than just one, like along a transect of points to analyze changes to the waves as they travel toward shore (bottom image). This provides a wealth of information about wave transformations in space and time, which we are using to better understand changes in waves as they travel over rocky bottoms.

Drone lidar-based observations of water surface elevation for one minute at the location given by the red circle in the inset. 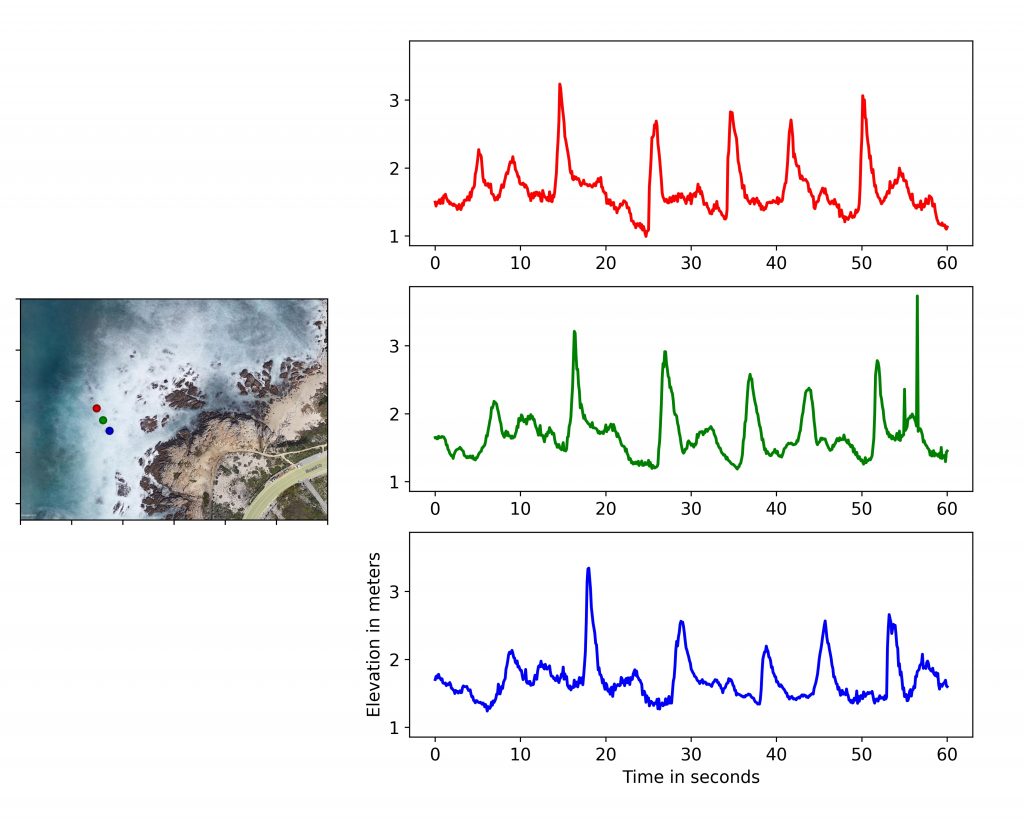 Drone lidar-based observations of water surface elevation for one minute at three locations given by the colored dots (colors match data). These observations can be used to analyze changes to wave height as waves travel onshore from red to green to blue locations.